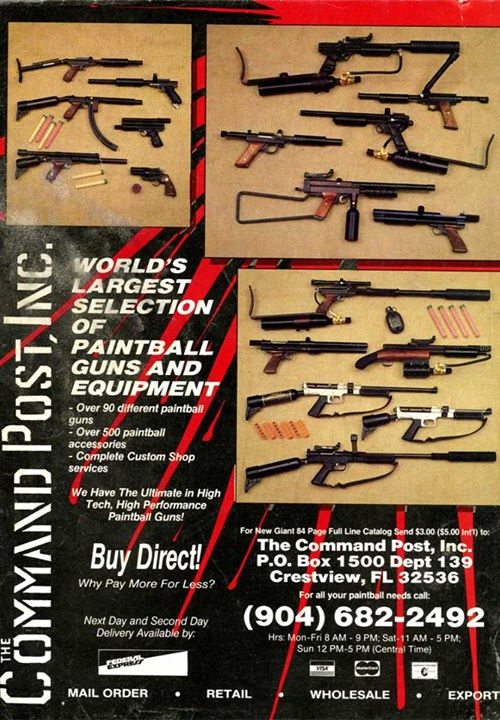 Here is a Command Post ad scan on the back cover of the March 1989 APG. Checkout the unique paintguns featured including a Reversible Feed Sniper 1, a Brass Eagle ”Eagle” and several others. Command Post was as Tim Ellwood wrote me, ”The Big Dog” of Mail Order paintball (and airsoft) from 1987 until probably late 1989. Ellwood and his business partner Larry Littlefield ran the Command Post out of North Florida until Tim left in early 1989. I believe Littlefield went on to run WWP and possibly Livefire paintball. Ellwood said that Littlefield later ran a para sailing company in south Florida. According to Tim, Larry died last year (2011). Ellwood wrote that ”[Littlefield] was killed trying to land a plane in the Bahamas during a storm. I read he was still into paintball and airsoft even though he was in his 60’s by then.” Find this post on facebook at:

Here is a Command Post ad scan on the back cover of the March 1989 APG. Checkout the unique paintguns featured.Command…

Posted by Baccipaintball.com on Friday, October 5, 2012

Bud Orr on the WGP Sniper 1 with with...

What do the prefix in front of early smg 60 serial numbers mean? HT, DT and HR are some of the examples but did DT proceed HT?
Read more