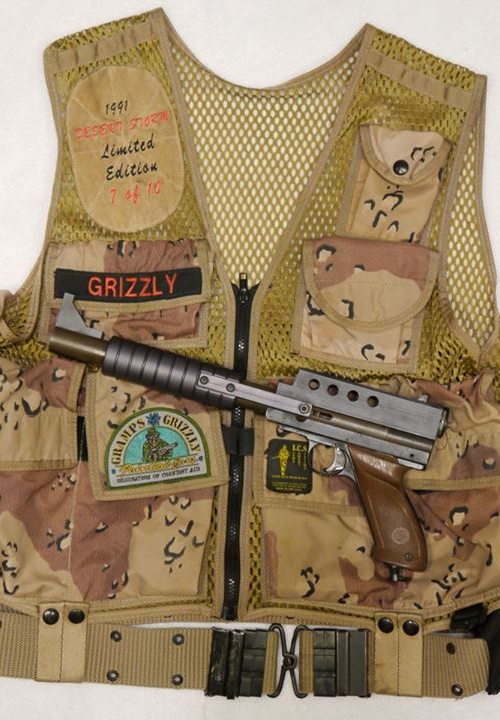 Here is a better pictures of the KBS Eliminator that was on the shelf at Mac 1 on top of Mike ”Grizzly” Grubb’s Idema vest (edit: the vest was in my closet not at Mac 1).

Gramps and Grizzly wouldn’t have made these for very long after that because that is right around the time when the first Annihilator’s hit the Southern California scene and then everything was direct feed.

The only publication I have seen a picture of this pistol in is the first (edit: third not first) mail order catalog from Command Post from 1987. I’ll post that ad shortly.

(Edit: I originally wrote KBA instead of KBS)

A table of misc paintguns and equipment that I'm preparing for videos tomorrow.
Read more

Eric, aka "Maverick," of StockClassPaintball.com identified an Idema accessory as an Idema Mask clip which is used to hold a mask to a players belt.
Read more

Two ad flyers for Idema Combat Systems Vests and custom tailored modifications. Idema vests were popular with paintballs on both sides of the Atlantic.
Read more

Keith Idema presented the Sargie awards as an alternative to the standard 1st, 2nd and 3rd place awards in honor of his Mongolian Tibetan Shephard, Sargie.
Read more

KBS Eliminator on the shelf at Mac 1 Airguns

Several photos of a KBS Eliminator I discovered on the shelf of Mac 1 Airguns. One of Gramp's and Grizzly's first creations, this was an amazing find!
Read more