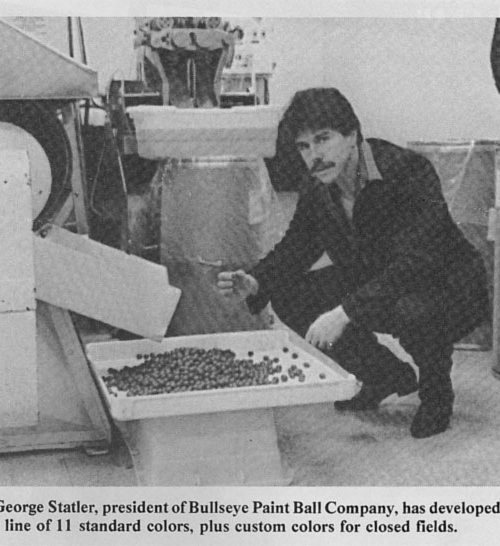 Here is an image of George Statler scanned from the July 1988 issue of APG.

George was the president and owner of Bulleye paintballs as well as a player on the Red Devils and later Gang Green, a Pro Team out of the North East (Pennsylvania, Massachusetts.

Last week when searching for information on the Guardian semi automatic made by Neely Pneumatics I talked to Marcus Neely and he gave me a little history on Gang Green and, the Z series of Semis, the Checkmate, Falcon and Guardian.

Marcus said that Statler was an excellent person to work with and at time provided financial backing.

Eventually after Marcus’ split from Moe Dumont / Montneel George Stratler asked his to built an Icon for Bullseye to distribute.

Marcus said he wouldn’t copy the Z but he would build a blowback that kept the same feel with a few improvements.

But unfortunately it was ”rushed” and ”inferior to the Icons” but still a decent semi for the time.

This led to the checkmate being produced.  Marcus told me he made 500 and Stratler sold all of them (or at least paid for them all from Marcus).

A list of rankings from the finals of the 1991 North American Paintball Championships. The PMI Piranhas and the Lords of Discipline took home the gold and silver.
Read more

The Ironmen pose, at what was likely the 1991 Chicago Open. Photo was sent to me by Tim Schloss of Tiger Striper Products.
Read more

Some of the history behind Montneel and Gang Green and their relationship with George Stradler of Bullseye paintballs.
Read more