One of the 1994 Nickel Plated Autocockers awarded to the Ironmen, this was Dave Youngblood’s gun. I just finished restoring it with white Carter grips, a unireg, and a classic duckbill and it’s shooting great (I do need to rebuild the 3 way though.

A year ago I purchased Clayton Kyle’s 1994 Nickel Ironmen autococker. Shortly after I got a line on two of Brahim Estephan’s Ironmen guns from a long time So Cal paintballer, Paul Schreck. Schreck has been an old friend of Estephan and aquired a bunch of his old OTP stuff and classic cockers.

One of Estephan’s guns from Paul which I rebuilt from just a body.

Since then I have become friends with Paul and once we were chatting and he told me the nickel Ironmen gun he would love to see surface would be Youngbloods. From the pictures when the Ironmen used the 1994 nickel autocockers I could never identify Youngblood playing with one of these autocockers so I assumed one was never made for him.

About three months ago Paul called me and told me he might have a chance to purchase a Youngblood gun. A few weeks went by and I didn’t hear anything else from Paul and then I received an email offering the same gun from a So Cal local. 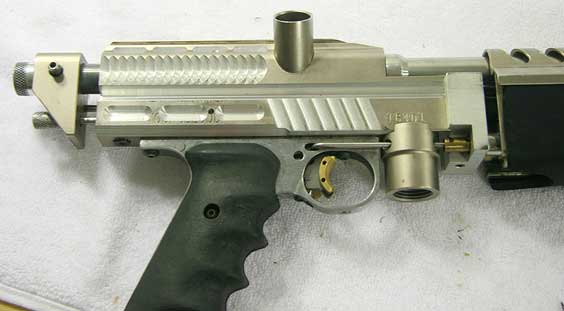 Youngblood’s prior to being rebuilt (as Paul received it from Andy minus the inline reg).

I called and talked to the seller and he told me he did promise it to another buyer but I could have a chance at it if this buyer fell through.

Paul got it soon afterwards and then traded it to me.

Andy, the original seller told me that Dave gave the gun to Earon, who cut it up and then sold it to him.

Each of these cockers were engraved on the right side for the Ironmen and the player they belonged to. Although partially milled off, this cocker was engraved: 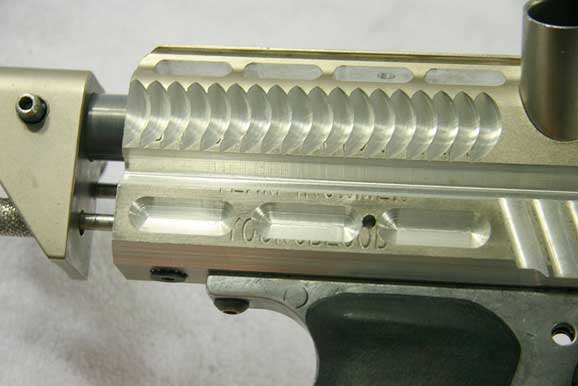 You can still barely make out “Youngblood” engraved on the right side lower tube under Earon Carter’s stylized windowing.

Before trading this cocker to me, Paul offered it back to Youngblood. Youngblood wasn’t interested but did say this was his first gun he ran HPA on. I can’t find any documentation of Youngblood playing with this gun and I don’t think it was specifically milled by Earon for Dave but instead was likely cut and then sold to Andy. 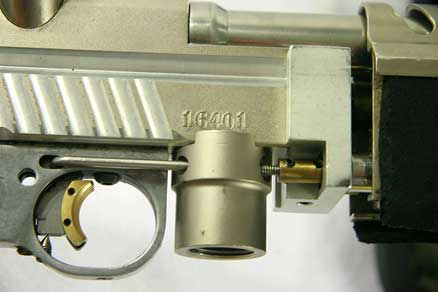 This serial on Youngblood’s 1994 Team gun is one after Darryl Trent’s Nickel Ironmen Autococker (16400) and one before Clayton Kyle’s Nickel Autococker.

“If you left your stuff at Carter Machine, Ken Kidd, Fernando or one of the other guys that hung out there would start milling on your stuff because they were bored. I left one of my cocker barrels there, and when I picked it up, Wes Wong had drilled ports on it like the old Smart Parts barrels. They did the same thing to my cocker. When I left it there, it was anodized black. When I got it, it was all cut up and silver. They also did that to one of my Phantoms, but I asked them to do it to the Phantom.”

Regardless of whether this gun was cut for Youngblood or not, it’s unique Carter cuts and style really embody early 90’s cockers, the Ironmen, Youngblood’s style and classic Carter goodness.

For more information on the SC Village Autocockers vs Automags game on August 11th, 2012 checkout this thread on MCB:

For more information on 1994 Ironmen Nickel plated Autocockers checkout this article on baccipaintball.com:

Big thanks to Paul for the gun, Manny and Earon for the grips!

And checkout the guns Earon Carter offers at:

And of course check out baccipaintball on Facebook at:

And see browse our inventory of vintage paintball everything at:

A look at a PMI 3 paintball gun that has the matching feed block, side plates and trigger guard. This paintgun is likely from 1990.
Read more

The California Cobra and The Commando