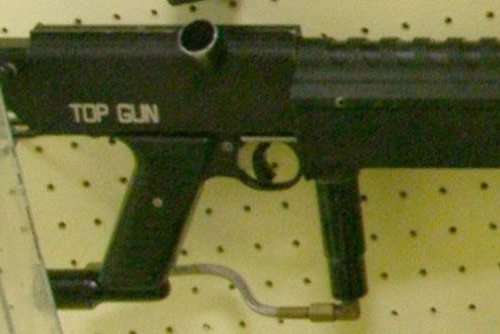 Here is a Sniper 2/Autococker rental from Top Gun NJ with the larger style engraving. This paintgun is in the EMR paintball museum and I took this picture in 2008 (sorry for the bad quality!).

When I sent this picture to Mike Galvin Jr. it brought back a lot of memories. Mike wrote me that because of Bud’s connections to Sat Cong Village, ”Ray got most of his ideas for rental equipment as well as field operations from [there],” and he went on to write that Top Gun’s ”Sniper 2s were the work horses of the rentals for several years.”

Another interesting distinction which Mike pointed out that I hadn’t noticed was the size of the ”TOP GUN” rental engraving.

Mike wrote me:
”As far as I know, Ray got the bodies in from Bud Orr with the block letters TOPGUN engraved in the side of the bodies.
Now here is the kicker to all of this, there were at least 2 different engravings that took place. The original [engravings] on the sniper 1 bodies were smaller in size.”

Galvin went on to write that the later Snipers and Autocockers were engraved with a ”much larger block lettered TOPGUN.”

Before reading Mike’s emailed I hadn’t noticed the difference in size and styling of ”Top Gun” but it is definitely noticable in the pictures.

Pump UWL Practice with The Foot Clan at SC...