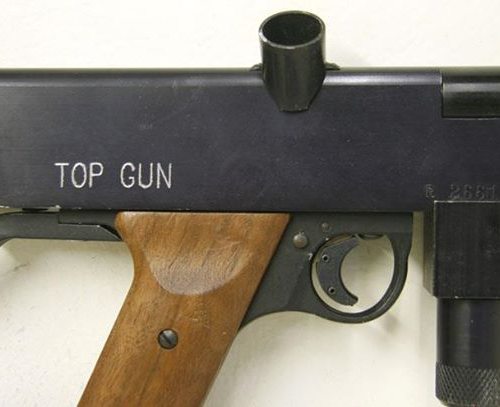 Today I’ll be posting up a few more Top Gun related pictures and scans.
Here is another shot of the Sniper 1 I posted yesterday.

This sniper 1 features a reverisble feedneck and also has the highest serial number I have seen on a sniper 1, R 2661.

I have heard that reversible feed snipers were some of the earliest guns that Bud produced and although I have seen a few with very low serials I have also seen a few others with scattered serials so I don’t know if this is true or not.

I imagine that one possibility for this could be that some of these guns were produced without serial numbers as very early rentals. When (if) they made their way back to the factory later on they could have received serial stampings. This is not a fact, just something I thought up that could explain this but they could also have been built early and stamped as they were sold?

I have heard the R stamp means everything from Rental, to Return, to Reversible feed or even Reject. I have seen standard cockers and sniper 2 bodies with this same ”R” stamping.

This body also has the ”Top Gun” engraving on the side with what Mike Galvin Jr describes as the earlier ”smaller engraving”.
Mike wrote me:
”The original [engraving] on the sniper one bodies were smaller engravings. Smaller in size then the much larger block lettered TOPGUN found on the later sniper 2 bodies.”

I will post a picture of an engraved sniper 2/Autococker body later today from the EMR museum.

A line up of classic pumps with stocks

Bud Orr on the WGP Sniper 1 with with...