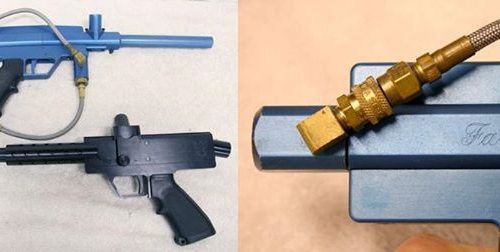 When I purchased this off Eric, he told me it was the only prototype and likely didn’t know about the other two.

The differences in the gun Rob is holding to the pictured gun are the shown vertical adapter and the missing the blue bottomline cradle for an hpa tank’s regulator.

Besides the mostly worn off black silkscreen on the side of the receive there is also “Falcon” engraved onto the side left side in cursive which I don’t think would have been on production guns.

Comparing the blue gun to the mysterious ad scan shown in part one several differences are apparent:

The anodized barrel rather than the J&J the picture shows.
The powerfeed shown in the picture.

In the attached picture the Falcon sits side by side with a Phoenix and the engraving on the left side of the receiver is shown.

K-C No Hot Shots’ Gas Through Grip on Mags...

Some photos of K-C No Hot Shot's Accessories including the Gas Through Grip assembly mounted on Autocockers and Automags and some history on Kermode's regs.
Read more