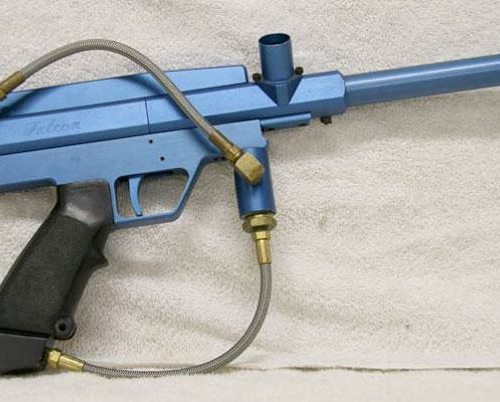 Around six years ago I first contacted Eric Scott about some of his Phoenixes. At the time I asked him if he happened to have a Falcon since I knew he was some how associated with these guns.
He did have one in parts and I bought it from him (and eventually got all his remaining Phoenix parts).
The Falcon Eric sent me was disassembled but after I figured out how it went together it seemed to cycle well hpa.

I believe parts for 20 Falcons were made but based on stories I have heard most Falcons besides the three in that picture were never assembled and were dumped into a lake.

The black Falcon likely resided with Neeley. Eventually it may have been taken by his coursins since according to Mike at PNL Paintball Neeley’s cousins took everything he had because of a debt.

The Yellow Falcon is likely the gun that at one time was in the EMR museum. Although it was missing in 2008 when I traveled there for Pump Pandemonium and I don’t know if it has returned since?

I think the pictured Blue Falcon may be the blue gun of those three since Rob was Eric’s stepson.

K-C No Hot Shots’ Gas Through Grip on Mags...

Some photos of K-C No Hot Shot's Accessories including the Gas Through Grip assembly mounted on Autocockers and Automags and some history on Kermode's regs.
Read more