Here is Paul Schreck’s Circle Pistol which uses one of his Circle Snubs.

Find Paul for sale thread for these snubs here:
http://www.mcarterbrown.com/forums/misc-paintball-items/246958-boxgun-snubs-sale-look.html

I more compatibility information on the snubs here:
https://paintballhistory.com/pauls-circle-snubs-boxgun-stock-class-breech-drop-nelson-builds

After assembling and fitting the parts, Paul had the project anodized Matt Bleck.

By using his own shorter length snub Paul was could use the Redux’s valve body which is standard Nelspot specs instead of Carter Machine long Snub length specs.

Paul originally designed these bodies to modify classic Check It Product’s Super Stocks and Carter Machine Box Guns from one piece stainless unibody snub barrels to be able to take cocker threads and use the Tech T kits he prefers.

Above are a couple photos showing the only sign of the Tech T kit visible on this pump. Paul then found stainless barrels which he had cut to custom lengths to adapt into the Tech T kit, fitting flush with the end of the barrel. 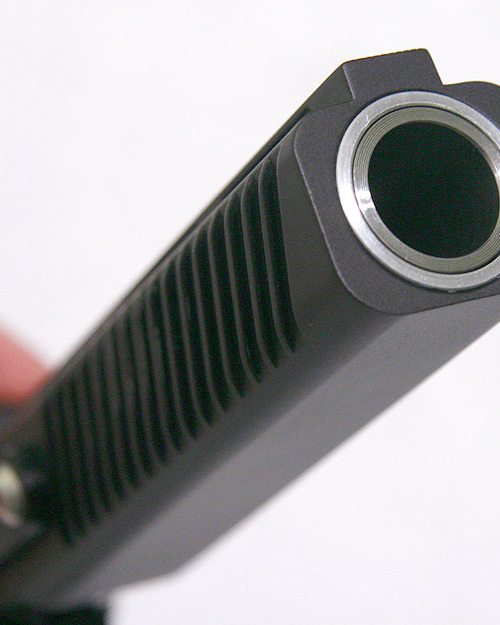 For Paul’s Box gun modifications I think he welds a nut to the base of the Circle Snub” and to give the front grip frame screw hole in the snub more meat. But for this pistol Paul is using a collar which help secure the frame against torque which could otherwise strip the threads (although it does feel secure without the collar) surprisingly even with only a few threads to secure the snub to the rail.

The above photos show the collar attaching feed and securing the snub body to the rail. 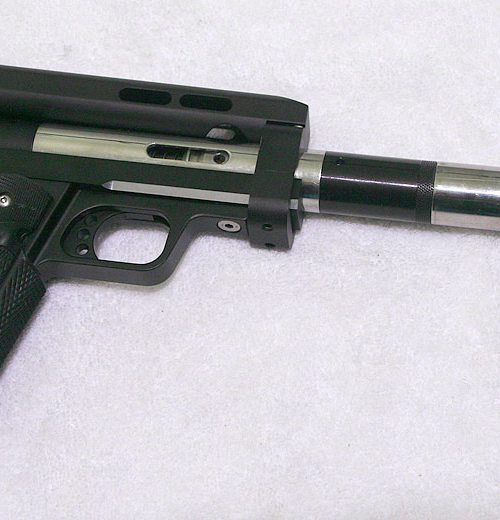 The Tech T kit shown between the snub and the stainless end of the barrel. The end of the barrel is sized down to meet with the enclosed and hidden pump spring inside the RTR Carter Pump handle

Paul added some after ano milling/highlights to the rail to accentuate the stainless snub and barrel. 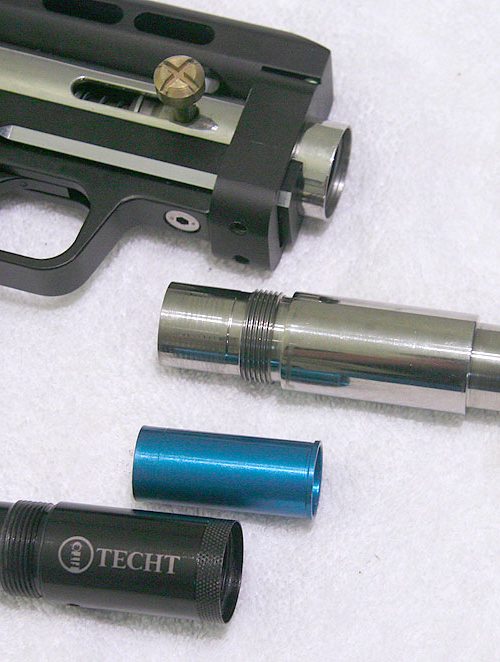 Paul found the Tech T barrel kits to be a great match for these snubs because the insert goes in from the front (similar to a freak) and the larger OD portion on the front side of the Tech T insert is wedges in by the stainless Cocker threaded barrel front he uses. The Tech T sizers are also super short and can be used on other cockers as well.

It might not be obvious right away but a random barrel with Freak boring has nothing to wedge the freak sizer against and prevent it from sticking to the bolt oring. A freak back could be integrated but while testing a few barrels I found that Freak backs has a slightly wider OD before the threads which hit slightly on either the snub to grip frame or top boxgun feed hole. This could easily be fixed but I still wouldn’t run a freak back unless a slight bevel was added to it. 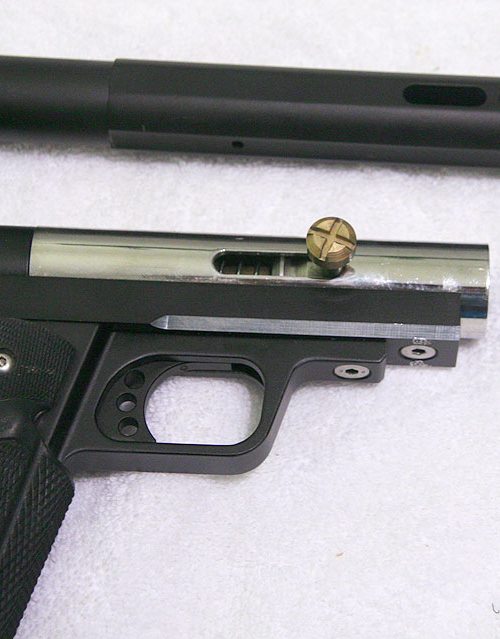 Removing the collar makes the top threaded hole for the boxgun feed visible.

Another adaptation of Paul’s ”Circle Snub” would be on a Redux. The Grip frame, Rail and in grip valve Paul is using on his Circle pistol are from Mongo so with Paul’s body, a buzzard pump handle, Tech T kit (and barrel front), collar and feed a Redux could be transformed into a setup very similar to Pauls. A standard nelson back bottle could even be adapted (from a Bushmaster, Taso or lapco pump) and the setup could run backbottle.

The above photos show the length differences between Mongo’s Redux snub and Paul’s Circle Snub. The longer distance in Mongo’s Reduz Snub is because the freak back is integrated into the body resulting in a larger smaller ID area which the front grip frame screw can grab. This makes all the difference when it comes the stainless body being secured into the rail/frame/receiver without a collar.

I love my Redux and it sees play more than any of my other pumps but I don’t end up changing the freak too often and barrel options are limited. Paul’s snubs on the other hands are very compatible with older after market barrels (I keep bevels in mind though). I tried several OTP barrels (G1s that take and don’t take Sizers), Brass J and J, and a carter barrel and didn’t have problems with the fit on any. The only tested barrel that didn’t slide in and thread was the freak and as I mentioned above this can be remedied by a little sanding inside the snub.

Above, A Carter Cocker threaded barrel from Jonny Rohem’s Dragoon is threaded into the Circle Snub

From the above photos of the Polished Dragoon, the length of the Circle Snub vs the Carter snub is apparently. The Circle Snub is shorter with more room on the back for the standard nelson valve body to fit.

And the snubs with their valves removed and Standard nelson spec and Carter Spec 12 gram changer change bodies next to them.

And again here are the links.

Find Paul for sale thread for these snubs here:
http://www.mcarterbrown.com/forums/misc-paintball-items/246958-boxgun-snubs-sale-look.html

I more compatibility information on the snubs here:
https://paintballhistory.com/pauls-circle-snubs-boxgun-stock-class-breech-drop-nelson-builds