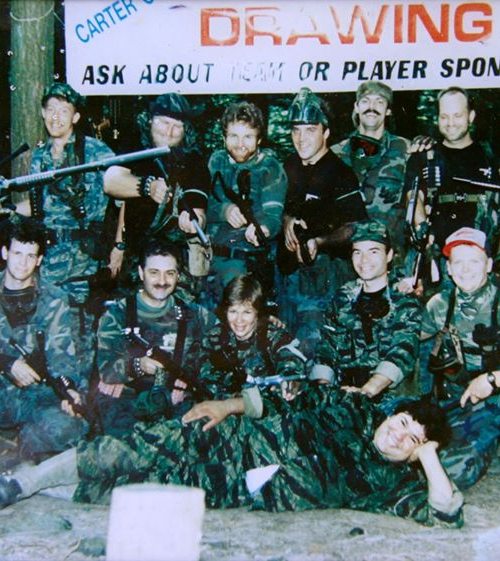 Working on the final revision of Kevin Donaldson’s video on the Termite Gun.  In the video I use a team image of the Widowmakers at the Skirmish Pursuit P.B.G.A National Tournament, August 20-22nd, 1988.

I found this copy of the photo in Earon Carter’s shop but other players on the team have the same photo. Earon’s looked like it may have been been in his not so waterproof shed at one time or another because it does have light water stains on it.

This was a thrown together team with East cost and West Coast players and it was the Master Blaster’s first introduction to the Termite gun so we are able to date all Master Blaster’s Termites after the date of the Tournament.

This team consisted of the following players:

Unsure of this first players name (was he a master blaster? anyone know?).  Updated this is Ray McDonald of  the PMI Piranhas.
Jerry Braun (Master Blasters)
Jessica Sparks (Who Are Those Guys and That Gal Mercenary Service)
Sam Cadwell (Nashville Ridgerunners)
Marty Tripes (Border Bandits)
Robert ”Rosie” Rose (the Master Blasters)

Not pictured are:
Rick ”RJ” Taylor (from the Nashville Ridgerunners)
Bill ”Thunderpig” Harvey (not sure of his team affiliation but maybe the Border Bandits or Widowmakers with Earon?).