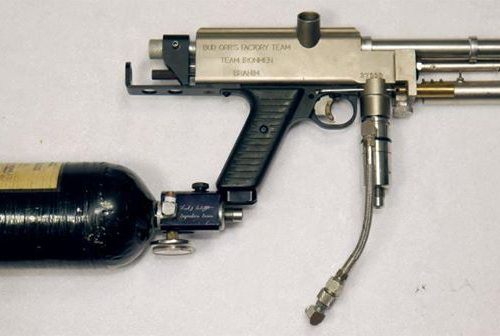 Slowly getting packages out this week.  Most have shipped but I have I think 9 orders from the past 7 days that haven’t gone out yet.

And here is a paintgun I’ve been meaning to post for a while.

Brahim Estephan 94/95 Nickel played cocker.  This style nickel plated cocker was given to the Ironmen in 1994 but Brahim’s dates a little later.  Youngblood’s, Trent’s, and Kyle’s all have sequencial serials around 16400 and a slightly different engraving style.

Estephan’s is much later at a 27K serial and is probably from 1995 or late 1994.  It definitely predates the 96 vert feed Ironmen bodies though.

I don’t think he played more than a couple times with this Autococker since Brahim was know for using his original sleeper Cocker.

I have been slowly piecing this paintgun back together with correct parts and it’s almost done.  Still looking for a matte nickel 3 way, and will either go with a full back block (similar to Brahim’s sleeper cocker) or with a nickel slant block.

Also will be changing the grips and possible the grip frame.