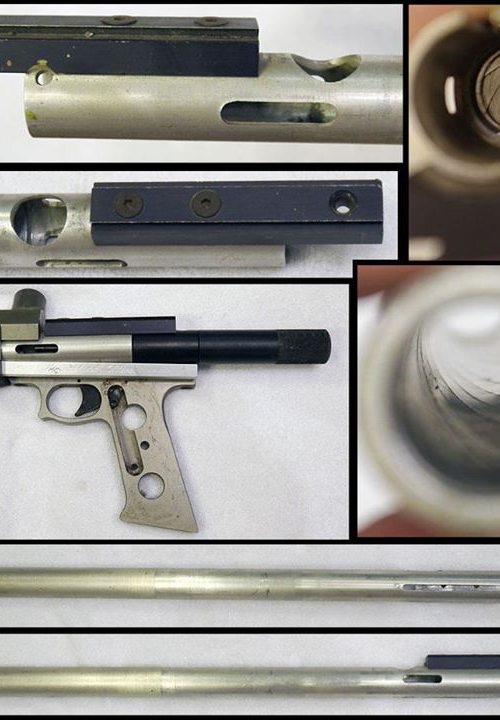 A gift from Bob ”Flex Hone” Fowlie, this body was likely made for a Termite since it lacks both a front grip frame screw hole and a feed mounting hole. This indicates it would use a Termite/Carter/Frank Gun collar.

Who it was made by remains a mystery. Likely created around 1987-1988, the barrel features spiral rifling which sets it apart from other Termites guns. I would say it’s meant for either a generation 1 or generation 2 Termite body.

The parts on the body are just a mock up, and not attached. The final version will be CA with a 1st generation commando aluminum pump handle and a black grip frame rail (not the polished rail). I will be using Kevin Donalson’s (of the Master Blasters) Termite for inspiration on this built and might actually go back to a nelson frame because of it.

Besides Armson barrels which would be a little later and much different than this body the only other machinist I have heard of making a spiral rifled nelson body would be Jack Kirby of the Paladin and Music City Hooters. The bore on his short run of nelson based pumps, the Helix were spiraled.

Chuck Link, who played with Kirby on both Paladin and Music City Hooters, isn’t sure if this barrel would be one of Kirby’s though. In the quote below Chuck describes the rifling pattern that Jack used in the barrels of his spiral ported nelson, the Helix:
”That barrel does resemble Jack’s…however I distinctly remember Jack’s Helix having a visible ”U” shaped groove as the spiraled rifling….porting looks similar though.”

Regardless this is a very rad barrel and I am excited about building this nelson and taking it onto the field so see how it does.

Watch Bob Fowlie’s interview on classic 80s paintball, the Flex-Hone and “Who are Those Guys?” Mercenary Service here:
http://www.youtube.com/watch?v=RHT7dfzsmHg

And BRM can be located on facebook at:
http://www.facebook.com/BrushResearch