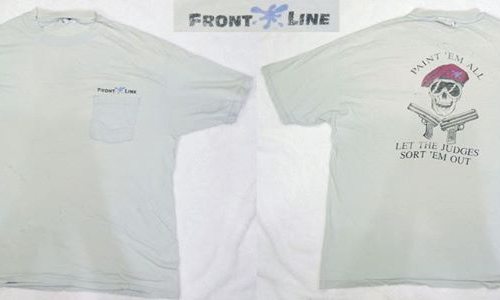 This is the first of many items I will be posting that Chuck Link of the ”TN Grim Reapers” and ”Paladin” has been sending me. A classic Front Line Magazine shirt!

Chuck wrote me the following regarding this shirt:
_____________
”The Frontline t-shirt was actually given to me when I started playing in 1988 by the guy that got me started playing on a team level, and that ran a local field here. His name is Jerry ”Big Daddy” Edwards, and he had outgrown it (not sure when/how he got it, but I know he had Frontline magazines at his house laying around, I remember seeing them).
That was my first ”paintball” t-shirt….so I kept it all these years, even when I also outgrew it and it had seen too many washings to continue to hold up to them.

”Big Daddy” played for the TN Grim Reapers 15 man paintball team, and invited me along to one of their practices…I joined up with them soon after, and later we were on the Paladin paintball team together as well.”
_______________

This is the second example of a Front Line shirt I have seen, the other is owned by Gilbert Martinez and was given to him after some field reporting he did for Frontline in the mid 80s.

Other items Chuck has been sending me which I will be posting and scanning include Masters programs, PCRI newspapers and a large assortment of patches relating to teams and fields associated with the Mid South Paintball Association (MSPA). Chuck participated in the MSPA from 1989 till the mid 2000s.

According to Guy Cooper, ”Front Line was actually the second magazine produced.”

A look at two Nasty Boys Paintball Loaders which date to the late 1980s and early 1990s. One style is unbranded and the other was likely produced by APP.
Read more

Chuck Link sent over several photos showing the camouflage that he and the teams he played on wore over the years including Tiger Stripe and Realtree.
Read more

Gilly shows off the DT1 Dust Devil loader on...

The DT1 Dust Devil loader is a small capacity loader that is spring powered and holds a capacity of 65 balls. In this video, Gilly has the DT1 on a CCM S6.
Read more

Identifying the Ironmen in the January 1988 issue of...