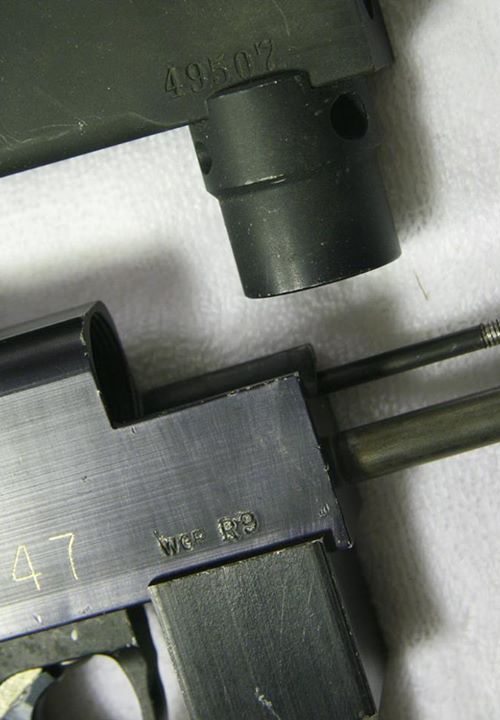 In the last couple months I’ve been investigating Sniper serial numbers (along with the reversible feed snipers) and I have come across a few more bits of information.

Mark Bragg of east St. Louis was able to offer the most helpful information so far. Bragg ran G-Force paintball out of St. Louis and has been a paintgun collector for a long time.

In a few emails I have exchanged with Mark in the last couple months he pointed out that most WGP serials numbers from probably 1990 until 2000 are stamped with an exaggerated serif style number script.

Mark wrote that almost all Sniper2s, Autocockers, Minicockers, 62 caliber sniper 1s, and the Top Gun reversible feed paintguns (that both he and I own) feature, as Mark wrote ”The same ”fancy” numbers stamped into them. What I mean is the kinda swirl and rounded ends of the numbers…kind of a script, if you will.”

Bragg went on to explain that Sniper 1 serial numbers are a more simple style stamp and the serif on these characters are NOT as exageratted.
Mark went on to give an example:
”My oldest sniper is sub 300, and has a completely different kind of stamp. Very plain. Like number stamps you could buy from a hobby shop or hardware store.”

Here is an old reversible feed body stamped ”WGP R9” I am trying to identify next to a cocker body from likely 1998 stamped ”49507.”
You can see the difference between the 9s in each serial.

As I parted out this WGP 1999 Mini STO I took photos of piece of the pieces so I could eventually re assemble them on another Autococker / Minicocker body.
Read more

A look at one of the green rental versions of the engraved Bud Orr Signature Series Autocockers used at SC Village around 1994/95.
Read more