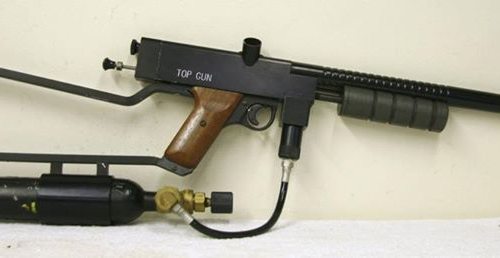 Thanks to Mike Galvin Jr for helping me put together some of the history on this Sniper 1 and a couple of other Top Gun related WGP guns I will post over the next few days.

This Sniper 1 was a rental at Top Gun and was likely engraved for Top Gun at WGP before it was sent to Ray Gong.

I received this reversible feed Sniper 1 as only a body from Peter Salgado. Peter was one of the lucky guys who got to purchased a bunch of parts from WGP when the factory was either moving or shutting down.
Since this was only a body (no asa, pump, grip frame, barrel…) I spent a long time finding parts and piecing it back together with appropriate pieces.