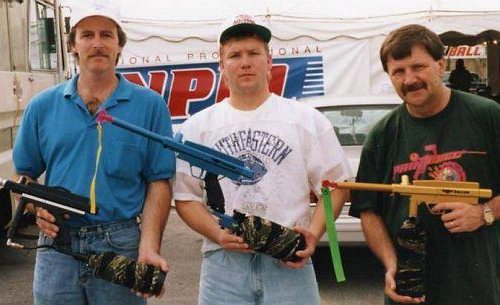 This picture shows (left to Right) Marcus Neeley, holding a black Falcon, Rob Fox holding a Blue Falcon and Rob’s father, Tom Fox holding a Yellow Falcon. I first saw this picture possibly on Chris Mader’s scan archive. Not sure where it originated from but I always assumed it was from a Paintball Sport International article I haven’t been able to locate.

Marcus Neeley ended up finding Paintball Heaven in MA, to produce the Falcon. Paintball Heaven had previously been distributing the Phoenix which unfortunately through numerous set backs had a limited run at around 300 guns.
With lots of Phoenix parts left over, Neeley and the Fox’s integrated the regulator design from the Phoenix (without the permission of Eric Scott) and created the Falcon. The Falcon used parts from the Checkmate and the Phoenix to create a spool valve, pneumatically actuated trigger paintgun that like the phoenix, was very advanced for 1994.
But instead of the pneumatic 3/4 way actuating the rotary breech in the way the phoenix operated, the Falcon used the actuator to operate the ram driven spring loaded bolt that theoretically would not chop.

Nick “HP_Lovecraft” Brassard had a great article he put together on the Falcon but unfortunately his Montneel Owners group isn’t working and the wayback machine doesn’t have the entire article cached:
http://web.archive.org/web/20080216043304/http://montneel.selfip.com/legend.html

Supposedly between 3-20 of these Falcons were produced in Black, Yellow and Blue before Eric Scott found out/ obtained a Falcon and issued a cease and desist for basically knocking off/stealing his regulator design.