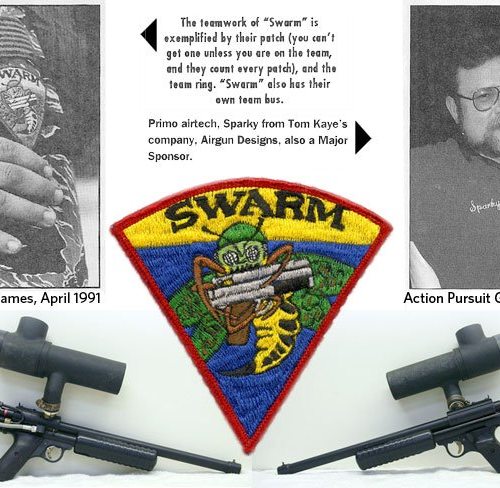 Here are a quick photoshop image I made relating to Swarm out of Illinois. Swarm used Combat Connection Sheridans and then moved to Automags (as an AGD factory team) in the summer of 1990 (prerelease).

Top right: APG May 1995 scan of Sparky who played on Swarm and worked at both AGD and Air America.

Bottom (left and right): Sparky’s Combat Connections Swarm Gun. Has his name cut into the site (not visible in pics though). Hardline and stainless line were for keeping liquid out of the gun since they ran these early guns with Rat Attacks in tournaments that didn’t allow constant air.


Take a second to support Paintball History on Patreon!

A neat Automags Online jersey I bought a couple weeks back. This design was likely a group buy on AO in the mids 2000s.
Read more

The Great Western Series was run throughout the 1990s by Russell Maynard. This flag dates to 1997 and lists a variety of sponsors.
Read more

Michael Karmen talks about Doc James Outdoor Games, which was located in Illinois and run by Green Beret and Medic Doc James during the 1980s.
Read more

A classic 320 Unireg from Air America. This unique regulator has Female ASA thread for the input as opposed to standard male threads.
Read more