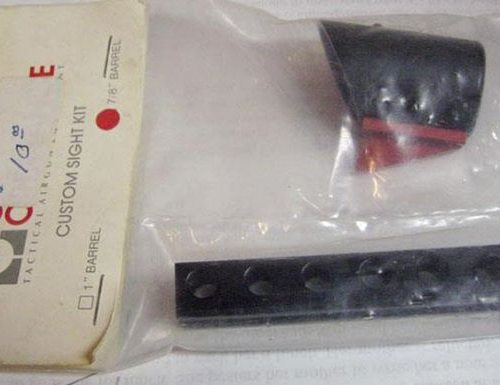 Came across a picture of some extra Cal Ordnance Mercenary parts I bought on ebay around 6 or 7 years ago.
I think I paid ten bucks, a total steal and an amazing find when combined with a Mercenary missing the sight rail and front sight!

Yesterday while I was talking with Jack Wada he mentioned the Knurled style 007 pump handle which I always thought Cal Ordnance made. Wada said this pump wasn’t made by Cal Ordnance but did shine a little light on one of the players/employees behind Cal Ordnance.

Jack said Ted Yoshimura, who played on Hello Kitty was the Owner.
I don’t know much about Hello Kitty besides that they are often associated with Team America and the Kamikaze Shooters and I believe their home field was Sat Cong Village. I also think they were around as early as 1987 from Sat Cong Village Tournament standings that appeared in APG.

Notice the similarities between the holes in the Cal Ordnance sight rail and the holes on team Carter Comps.

Maybe some of you guys can shine a little bit more light on Hello Kitty and Ted Yoshimura?

A video with Kamikaze Shooters' player Charlie Masunaka on his customied Worr Game Products Ranger that has been modified to Stock Class.
Read more

A look at one of the most bizarre paintball loaders I've come across, the E-Tron 130 Spin Loader from around 2000.
Read more