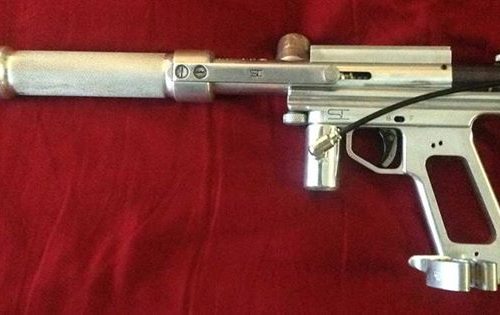 Sonny Phommarine sent me this picture of his Line SI Bushmaster. Sonny was telling me about this Bushmaster yesterday I think I remember him saying that he purchased it as an upgrade kit for a stock 007?

That does look to be the case since the engraving on the pump arm is early style ”SI.”
The one piece 45 grip frame is a later style line so since the front grip frame screw hole is recessed into the rail.

Couple neat upgrades are what looks like an adapted Automag Vertical asa. Sonny said he added this himself. I would imagine he ran a rat attack changer on it?

On the base of the grip frame is an accessories Sonny was given by the team captain of The Combat Crew, a 12 gram holder similar to what RTR sells.

I don’t know much about the Combat Crew so maybe you guys can fill me in a little and hopefully Sonny will correct me on any details I messed up.

A look at one of the most bizarre paintball loaders I've come across, the E-Tron 130 Spin Loader from around 2000.
Read more