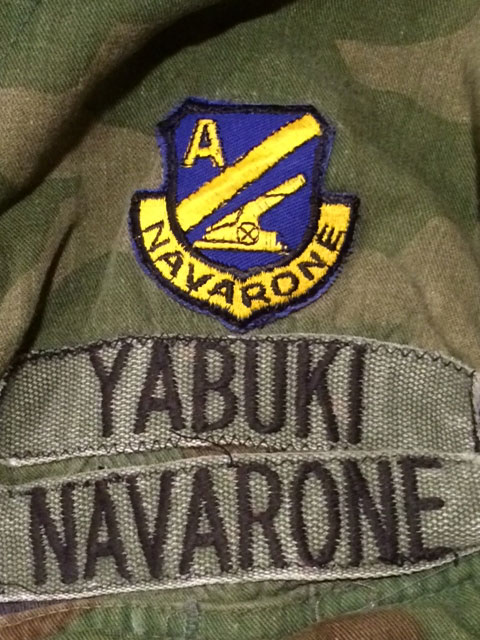 Last week I received an email from Navarone player Richard Yabuki. Yabuki played on “Team Navarone” in their very early days and competed in many of national tournaments. Yabuki started as a players on Navarone’s second squad Apocalypse (Red Patch) and then moving up to Armageddon (Blue patch).

Richard writes:
“The [red] patch was the apocalyspe team, or 2nd team. After Poconos I was asked to come up to Armageddon.”

Here is the Navarone A squad (Armageddon) at the PBGA tournament in the 1987.

And here is the numbered image. Richard pulled out his phone tree and identified the players:

Over the past week Richard has been sending tons of photos of his old shirts, patch and equipment over, a few photos of Navarone’s Championship patches, some from his patch jacket, a few from tournaments and my favorites, his Tshirt collection!

In many of the old magazines players on all teams could be seen wearing their team shirts and of course Navarone had some as well. Richard actually kept several of these shirts and they are some of the first photos I’ve seen of them, besides in magazines.

I do know that Cary Snodgrass left Navarone to form his own team, Top Gun and create the “Top gun” pump marker but according to Richard these early “Top Gun” patches were for 750 and 1000 confirmed eliminators.

Navarone was well known for their early on domination tournament paintball, which is why wore shirts and patches with “Navarone, World Champions” embrodered into them.

Navarone also had a lot of exclusive team “Swag,” such as brass “shield” pins, navarone “sandanas,” silkscreened tiger stripe jerseys and were one of the first teams to earn a major sponsorship, which came from from JT USA.

“I also had a patch from Budweiser when they were going to sponsor us. They backed out [from the deal] because they didn’t want to be associated with “war games.” Richard writes. And in the early JT ad you can see the Navarone players wearing the Budwiser patch.

Yabuki identifies the three Navarone players pictures as:
”Three man photo taken on our home field…the guy on right is Rod Plunkett (#3), [the players in] the middle is Bill Homa (#1), [and on the] left is Jim Daniels (#2).”
“Our field was in Riverside somewhere close to lake elsinor it was just down the street from Andy’s house of course! Off of Nichols road [close to the ] 15.”  Yabuki writes.

This would have placed Navarone’s home field in the center of Sat Cong Village, Field Games, War Zone and what is now Jungle Island.

Richard goes onto write:
“You had rules before you got onto team like:
20 fields to play on.
750 kills ( yes you kept track and honor system).
You had to have to someone nominate you onto to team.”

Navarone is most well know for shooting their Diamond Dust hard ano (green) team Bushmasters and then moving into their polished pewter Navarone cockers.
But when Yabuki started playing, Ross Alexander hadn’t brought the Bushmaster or even the earlier breech drop Skirmish out so Navarone players used 007s.
They upgraded their 007s to direct feed pumps action but stood by 12 grams (both because 12 gram were more universally accepted at tournaments and because Navarone prefered the skill that came with limited air/paint setups.

Richard writes:
“We changed all the springs and drilled out valve tube even stepped the valve tube to get more gas expansion (if that was even possible!) got a good 21 shots out of 12 gram !!”
“That was 85 or so when we mod’d the 007’s. We had a machinist make us the pumps, barrels and side feeds.”

“I [modified] the power tubes for Navarone when I was on [the team]. Mike [last name?] and I did a lot of them in my dad’s garage.

Richard originally started playing paintball on ”Dambo’s Commandos which was a group out of Disneyland(In Late 84) , but [we] were told to disband since Disney also didn’t want to be associated with “war games.”” Richard goes on to write, “Dan [last name?] knew Andy and they asked us to join Navarone.”

Yabuki estimates that Navarone started around ”84, but they didn’t start playing tourneys till 86-87.”

In those days Navarone was well know for their W they would use to sweep the field. Richard remembers, ”I think Andy came up with the “flying W” in 85 and started winning games against local teams like Bushmasters, Kamakaze Shooters Sudden Death…… then he [Greenwell] knew he could win tourney’s.”

Richard is unsure exactly when he stopped playing with Navarone but he does remember he left close to the time they picked up their Line Si Navarone Bushmasters.
“I quit just before the team [was] sponsored by [Line SI with the] Bushmaster, [around] like 2 weeks before. There was some unfairness on who got money from some of the tourney’s and who didn’t.
I didn’t agree with Andy’s politics at the time so I bailed. My Buddy has an original Team Navarone green bushmaster!!

Richard would love to get in touch with some other Navarone members so if Navarone players want Richards contact information email me.

Thanks to Richard for all the photos of his gear, patches and memorabilia!

Edit 11-26-13: Correct a few errors, misspellings and the Navarone Squad order and names.  A Team was Armageddon (Blue Patch) and B team was Apocalypse (Red Patch). Also added dates, paragraph on Dambo’s Commando’s and Richard’s Navarone Pin on the JT USA hat.