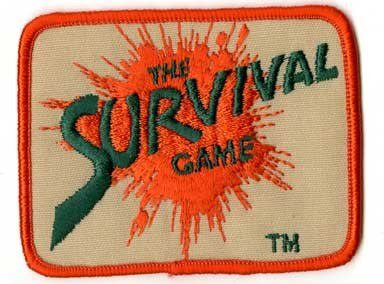 I talked to Bob Gurnsey today on the phone and he mentioned still having a bunch of National Survival Game patches left.

I would imagine they are the style in the patch image attached but they could also be the NSG championship patches (I’ll post one of these next).

In an effort to raise funds for his on going leukemia treatment he was thinking of autographing these and selling them.  I suggested maybe not autographing the patch but including a signed certificate with the patch.

I have sold a few of these style patches for $15 dollars on the site but despite that price what are everyones thoughts on their values both unsigned (15 or less?) and signed (more or less than 15).  Would you rather have a signed certificate or a signed patch?

I am not sure the quantity Bob has or if anything will ever become of this but I guess just gauging interest. I also would likely not be selling these.  But really no patch collection is complete without an NSG patch.

I’m sure many of you have heard of Bob’s on going treatment and his attempts at raising funds. Checkout PB Raffle Bob Gurnsey if you haven’t.

National Survival Games developed this inline semi automatic prototype in 1989 which never came to market and Bob Gurnsey kept in his collection until 2015.
Read more

A neat pair of bright blue JT USA Racing pants that have been cut down to shorts and fit perfectly.
Read more

Stanley Russell brought this Widowmakers patch over to show me. The Widowmakers were likely the South Bay Arms factory team.
Read more

Fitting the features of the National Survival Games Rapide into Paintball culture of the late 1980s and how it succeeded as a follow up to the Splatmaster.
Read more