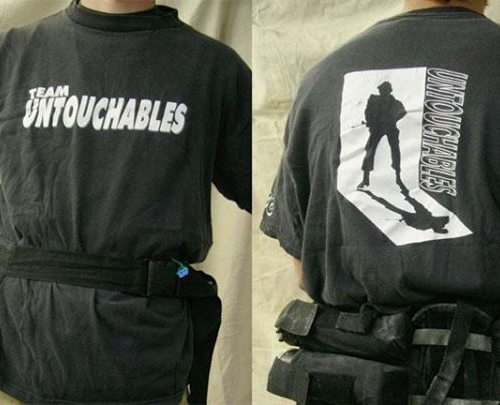 Saw this video of the Great Western Series Pro-Am Tournament on Christopher Richter’s youtube channel.  At 13:30 the All American’s are playing the Untouchables, a pro team out of Southern California that played Great Western and NPPL in 1993-1995 (I think)?

Last year (or was it the year before?) I met Lennie Villiados who played on the Untouchables, Team Genesis, Fatal Swoop,  and a few other teams. Lennie and his brother Les ran the California Paintball Park in Castaic, California (North San Fernando Valley).

I have attached pictures of one of Lennie’s Untouchables T-shirts.

Also in this video you can see one of the Gardner brothers wipping a hit.  Lennie pointed it out to me at 1:35 but I think it’s replayed again when the music isn’t playing. It may have been during the game against the Untouchables.

Lennie wrote me regarding this video:

”Ah , The good olds days. That was at Norrhstar Ski Resort. It doesnʻt show it during the game but if you look at 1:35 of the video thatʻs where one of the brothers was hit and wiped and Chuck Hentch was the ref that let him go and he was standing right there. BTW if you watch the Worr Games Ad thats me at the very end and also during the game thatʻs me with the pony tail hanginging out of my hood. Yes the camera loves me.”

Opps, forgot to attach the picture of the shirt the first time I posted!

The Great Western Series was run throughout the 1990s by Russell Maynard. This flag dates to 1997 and lists a variety of sponsors.
Read more

Looking back on Black Sunday's history with Robert Anderson as he revives the team for their future UWL, NXL, and Woodsball World Cup events.
Read more

A look at a unique abomination, a Sandridge set up Splat Attack Revenge.
Read more

The Brush Bandits and the Florida Annihilators form Team...

Joe Gorcsos explains the merging of the Florida Annihilators with the Brush Bandits to form Team Rage and Rage's early years from 1994-1996.
Read more