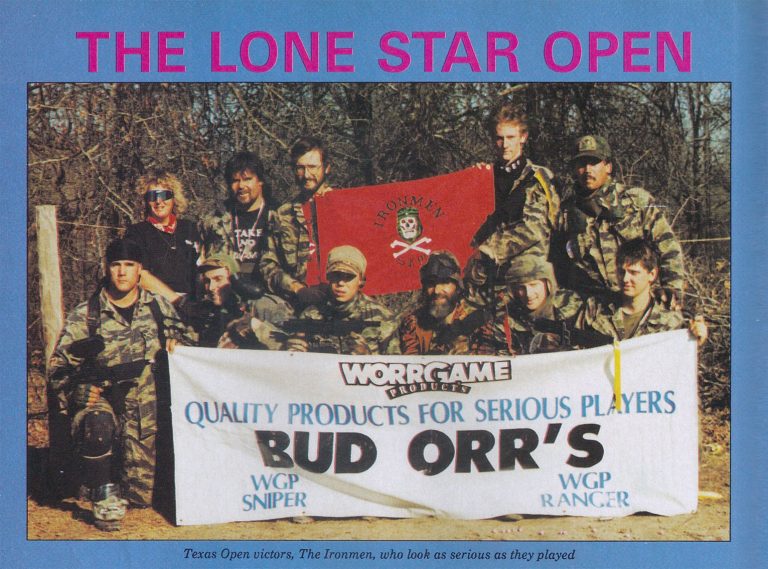 I find exact dates for the introduction of paintball equipment and events exciting because you can begin put together a more cohesive timeline and history.

Unfortunately many important dates are hard to nail down. The exact introduction of the Autococker is one date I have always wondered about.

Both Glenn Palmers and Mike “Grizzly” Grubb touch on Bud Orr’s Autococker development in there interviews (still haven’t started editing them) and the following articles in both APG and Paintcheck on the 1991 Lone Star Open offer a date on possibly the first event where the Cocker was used (by the Ironmen). Although neither article mentions the Autococker, it’s shown in the Ironmen’s team photos for each publication.

Last week I posted a photo of the California Bushmasters which Gilbert Martinez identified as being from the Lone Star Open (still need a source for the photo if anyone knows).
I wrote the photo was from 1990 but after a little bit of going though magazines I’m almost positive that photo is actually from The March 14-17, 1991 Lone Star Open.

Updated – 1-1-14 -Gilbert Martinez ads (from the facebook post linked below):
“…we captured and hung the Ironmen’s flag and did the same to the Florida Terminators and Texas Council of Captains (TCC) also.We stalemated with Constant Pursuit. Under the goofy scoring system you earned the same rank points as a full pull and hang if you stailmated and had more bodies alive. Even if the other team pulled your flag but didn’t hang!So dumb. I’m not even sure if there were any hangs in the Finals cuz everyone played just to stay alive with more bodies. Lame.”

The Ironmen went on to win this event and can be seen holding their Cockers in team photos published in both magazines’ issues (APG and Paintcheck).
The Worr Games Autococker isn’t advertised (or mentioned) in either magazine and researching this event I didn’t find much until I stumbled on an article written and posted to google groups on October 10th, 1992 by Alexander Franklin Rose, aka “Zander” of the Ironmen.

Zander writes on 10/10/92:
“Last year, a couple of months before the Lone Star Open ’91 I decided that since I was in my first year of college that this would be my last tournament and I would just have a good time.”
And he goes on to add:
“Fortunately for me a lot of things just happened to be coming together at this point.
Bud Orr had decided to sponsor a team for the first time and he decided to give us a shot. He flew out there with six prototype autocockers and the rest of our team still had our old Bushmasters.
The only reason Bud decided to do this was because he plain and simple liked us, and thought other teams liked us too.”

Attached in the team photo of the Ironmen scanned from Paintcheck’s write up on the Lone Star Open out of July 1991. I believe Zander is number 7 but maybe number 4?

Here is the numbered photo:

Find a scan of the complete Paintcheck article here:

Thanks to Gilbert Martinez for quotes, Wes Wong and Stephen Blair for help with identification.

And find a numbered photo of the Florida Bushmasters scanned from the same article here:
https://paintballhistory.com/florida-bushmasters-1991-lone-star-open