In 1994 the Ironmen continued to dominate the tournament paintball scene. They collected sponsorships from Air America, Tiger Stripe, JT and most notably Worr Games Products (just to name a few). In April 1994 they received custom engraved matte nickel plated Autocockers from WGP. 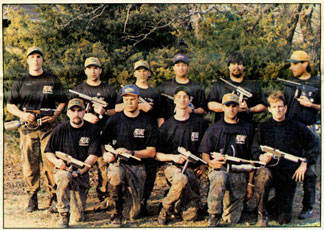 Ironmen show off their Nickel Cockers on the cover of April 4, 1994 Paintball News

Definitely one of the neatest team guns for the mid 1990s. In the middle of September of this year one of these guns surfaced on Customcockers.com and I purchased it. The seller picked it up on craiglist in San Jose. It arrived quickly and I began restoring it with correct era parts.

This particular gun belonged to Ironmen player Clayton Kyle who played on the team through most of the 1990s. Kyle was a northern California player who earned the name of “Lurch” because of his resemblance/stature to Lurch from the Adam’s family.

Here is a photo Tim Schloss of Pursuit Products/Tiger Stripe Products sent me of Team Realtree which was comprised of mostly Ironmen guys. This pictures was from a Reno, Nevada event in 1993.
Left to right, Dirk Gadberry, Marty Bush, Bob Long (in the back with the sun glasses), Darryl Trent, Shane Pestana, and Clayton Kyle.

It looks like Clayton Kyle is not holding this gun but instead a polished nickel Cocker.

The Side of this Autococker is engraved, “Bud Orr’s Factory Team, Team Ironmen, Clayton.” The Ironmen received these cockers around April of 1994 and most likely predate the release of the first batch of Bob Long’s Signature Series Autocockers. Shown to below is the cover of Paintball News from April 2, 1994 showing the Ironmen posing with these cockers.

A few months later APG featured a cover of Ironmen player, Shane Pestana holding his gun and the next month Dave “Youngblood” Dehane with his nickel Sniper 3.

But probably the best example of these Autocockers in action is the documentary, Ironmen: Road to Glory. Filmed during 1994 NPPL season, the entire film shows the Ironmen shooting these particular nickel Autocockers. Below are screen captures of Clayton Kyle and the cocker show above.

The 1994 matte Nickel Team Ironmen Cockers came with the standard non 45 WGP frame, matte nickel barrel, matte nickel shroud and most came with match back blocks, front blocks, and vertical asas. When I received this gun is had definitely been upgraded to play with and it showed with lots of wear from the back block slamming, the bolt cycling and the matte nickel starting to flake in a few small spots. The inline reg, entire front block, grip frame, asa/drop were all replaced to keep it as a gun that was being used. I had originally wanted to restore this gun totally stock but decided to leave the Bob Long Signature Series Ironmen engraved frame as it was a nice touch and just put early 90’s parts on it.

Mostly stock WGP parts were used when rebuilding with the exception of Pacific Paintball Smoothie Delrin Bolt (Pacific Paintball of Northern California (KAPP) who sponsored or tech’ed for the Ironmen in the early 1990s but probably not when these bolts were released). The barrel is a hard chromed J and J straight rifled with a pacific sticker on it. The inline is a classic Air America unireg which some of the Ironmen were if they weren’t using the huge Air America expansion chambers. The front LPR is an early Palmers Brass reg and the rest of the pnuematics are stock. The matching nickel front block was already missing so a stock matte black front block with a Cooper T Bleed valve was used which the Ironmen did use on these cockers. The Beaver tail is a Bob Long beaver tail and not the original matching matte nickel tail.

Ironmen: Road to Glory can be purchased from I&I sports or look on ebay.