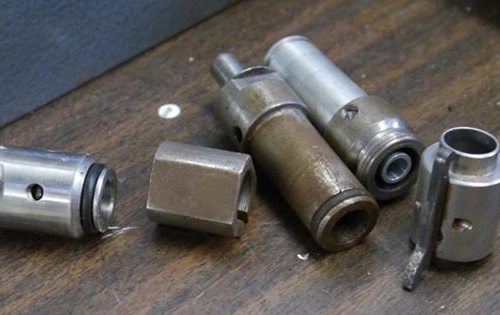 This media included a couple of IPPA Industry Member packets, ads for a loader he was working on (never came out) named the Mexican Gatling Gun and various letter he had written customers, and to magazine editors rebutting ads on barrel tolerances.

Bob also gave me a bolt which I believe is a Howdy bolt for the spiral rifled Termite.  He also let me take a couple additional bolts.

*The Breech drop bolts on the left is (I think) the howdy bolt. Is it has the oring on the Anti kink adjuster it should be a howdy bolt.

*The triangle hammer second from the left might be one he had his machinist made, I have never seen another like this aside from a few later Bushmaster hammers I found that are cut triangle. Bob had drawings of this bolt in one of his binders which is why I think it might have been made by his Machinist. It does fit the anti kink adjuster on both the left bolt and the center bolt.

*The center bore drop bolt is likely another howdy bolt or a techna ball bolt.

*I am not sure what the bolt second from the right it, it’s non adjustable with a steel back and an aluminum front.  It might be an early bushmaster bolt?

*The hammer on the right is either a techna ball hammer or the hammer to accompany the Howdy bolt.

With this additional media I should be able to finish the first of Bob’s movies later this week.

A look at a Bore Drop Team AGS pump paintgun I found last year. The included Hypertech internals along with other high end parts made a competitive package.
Read more

A look comparing the hammers from and NW Comp and CMI Thunderpig P1 pump gun. Both are similar in shape and use a similar sear.
Read more

Breaking down a Nelson Based WGP Ranger

In this series of videos I go over assembling and then breaking down a WGP Ranger and some of the modifications to parts.
Read more