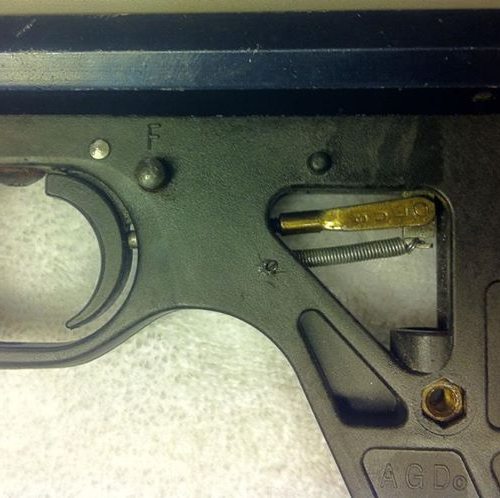 Here is an old school Automag sear return spring modification which I haven’t seen in a while. Spring on the back of the sear hinge to pull the sear forward.

I would imagine this helps with pressure problems (low tank?) where your on off pin might not reset all the way? If I’m wrong correct me.

I remember my friends had this mod on there mags in the late 90s.

Proline released the Automag Auto Response frame for the Automag in 1994 along with the standard Automag 45 frame. This articles looks at one of the standard frames with a custom aluminum trigger.
Read more

A neat Automags Online jersey I bought a couple weeks back. This design was likely a group buy on AO in the mids 2000s.
Read more

Medusa Sling Frame for the Autococker and Automag by...

The Medusa Sling Frame was developed in 2002 by Pro-Team Products and Benchmark for Autocockers and Automags and used a "Mag-Field" magnetic trigger return.
Read more