Home Events The California Bushmasters at the Lone Star Open 1991 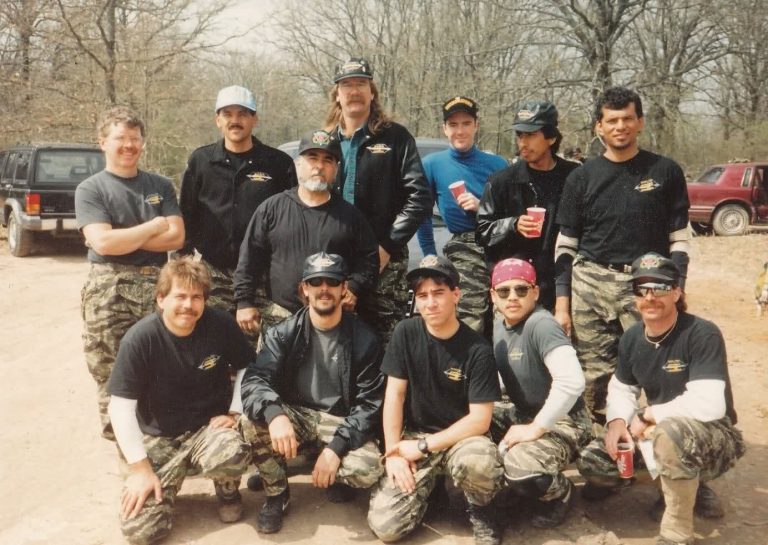 Does anyone know the origin of this photo of the California Bushmasters from the Dallas Texas 1990 Lone Star Open. Specifically what issue of APG it may have appeared in?

Benji “Bigbthebenji” Silverstein had posted it on pbnation a few years back (not sure if Benji scanned it or found it somewhere else?) and as Gilbert “Gilly” Martinez recalls:

“Randy Kamiya took that original pic at the Lone Star Open in Dallas Tex ’90
He published it in a later edition [of Action Pursuit Games] with no caption in the section showing big games/happenings/scenarios around the country where they list various states. If memory serves me right.”

“Circa 1990 Lone Star Open Dallas Texas
History lesson: this event marked the 1st appearance of the semi-auto, Bud Orr’s Autococker. Eh, we still torched the Ironmen w/Bob Long using them..
That tall guy standing in the center is Ross Alexander of Line SI. We were his Bushmaster Factory Team.
That’s my buddy Danny [Guardado] next to me who played today.
I am the longest continuously playing player on the West Coast. No joke 27 years.”

And yes I believe Gilly’s statement and considering that post was from 2009 you can tack on a few more years.

I emailed Randy Kamiya but unfortunately he didn’t remember the details of the photo, which is understandable since it was 23 years back and he probably took hundreds if not thousands of group photos during that time.
“I can’t remember if I took that pic or not. I recognize all the faces but can’t give them all names. Sorry for not being much help.”

Here is a numbered copy of the same photo and I’ve identified the names I know below.
If anyone can help fill in the additional names please post and I will edit the names to the numbers (Gilly added 1, 8, 10 and 11).