Quest opened in 1983/84 as one of the earliest paintball fields in Southern California. It was run by Jim Storm (a gunsmith out of Calabasas) and his partner, a Sherif Deputy.  Quest was preferred by many players because of the cool coastal climate. Players who called this field home preferred the temperature and coastal breeze compared to many of inland field options (Sat Cong Village, War Zone, etc).

During this time as Quest many players and teams called the field home including Johnny Barber and Jessica Sparks, who both played on the Wolfpack and Who Are Those Guys and that Gal Mercenary Service. The Wolfpack became one of the most competitive Southern California teams of the time, captained by Danny and Lanny Lambert and shooting the revolutionary direct feed unibody Nelson based pump marker the Frank Gun. The Frank gun was designed by Frank Postle and John Silarno and was machined at Silarno's machine shop. The team voted to keep the markers within the team and not offer them to players outside the Wolfpack and sister/feeder team, Landsharks.

Due to some unfortunate family circumstances and a few legal issues at the field, Storm and his partner closed down and several interested parties raced to sign the lease. Ultimately, David Bassman and his wife Dawn Bassman would get rights to run the Malibu field.The field reopened as Conquest in around 1987. Bassman's team, Sudden Death would call the field home for the next two years. Players included, Dave and Dawn Bassman, Silver Spoons star Ricky Schroder (along with his father), Jerry Bard, Joe Comstock, the Verbeek brothers (Tony and Ron) and many others. Ironmen player Marty Bush actually got his start on the team.

The team competed in local and national events during this time and even had a custom paintball marker known as the Verbeek-O-later designed by Tony Verbeek, along with his cousin and boss Randy Christoph at Sigma Precision in Chatworth. This revolution marker was a nelson valve design and featured a removable barrel. Around 20-30 of these markers were produced for Sudden Death to use at the 1988 National Survival Game Championships.

Unfortunately, Sudden Death tested the markers with larger Nelson paint, and while the marker did have a removable barrel the idea who change bore sizes wasn't fully realized by the time the marker was produced and the paint that the 1988 Survival Game Championship offered, RP Scherer ended up being too small. Combined with cold weather conditions the team didn't do as well as they had hoped with their custom paintball markers in the competition, overall finishing around 5th place.

Bassman and the team continued to play competitively and picked up a sponsorship from PMI during 1989. By the fall of 1989 Sudden Death returned to the 1989 Championships (now called the 1989 Masters event) shooting Piranha Long barrels. They took second in 15 man behind the Lords of Discipline.

After the end of the Wolfpack, some players left paintball, but Barber and Sparks went on to start Who Are Those Guys Mercenary Service and partner with their sister team, "Just Us" which consisted of players from the Rap group NWA and other music industry professionals. Their game chant would be, "Who are those guys? Just US!"

The Conquest era also marked the entry of well known paintball innovator Colin Thompson to Paintball. Bassman, who was not mechanically minded, asked his friend Thompson to come and tech their equipment. Colin became obsessed with the technical details and shortly after had markers produced which he dubbed the "Colin Gun." These were conversion unibodies for the Nelspot 007 and were likely machined at Sigma Precision through his connection with the Verbeek brothers. Colin went on found Los Angeles Paintball Co. (LAPCO) and design the Grey Ghost marker, one of the top of the line and well world reknown pump arms markers of all time. The Quest / Conquest field is remembered for containing movie sets for various shows, a who's who of paintball, film and sound professionals, a hot bed for innovations and competition and some of the most unique playing fields in California. Players still remember the Birds of Paradise field where crawling was the name of the game.

Bassman went on to start various other iterations of Conquest around Southern California over the next two decades but players will never forget the field in Malibu.

I have been told that the land in Malibu was sold to a condo developer based on promised sewer plan that was supposed to be implemented. This was struck down in a vote and the land has sat dormant since. Wolfpack Players Dan Hotes recalls driving through Malibu during the recent 2018 (?) fires and the land was being used by emergency personnel and Cal Fire as a staging area. 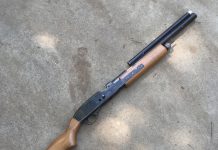 dan@paintballhistory - September 18, 2018 0
This custom .68 caliber rifle was built from a Crosman Trapmaster by Jim Storm, a gunsmith from Calabasas and... 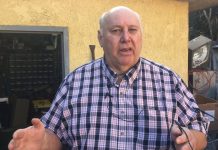 Johnny Barber on Wolfpack and the Frank Gun

dan@paintballhistory - December 3, 2017 0
Johnny Barber, of Wolfpack and Who are Those Guys and That Gal Mercenry Service on his paintball history. Barber talks about the origin of the Southern California team Wolfpack, in 1985, and their existence through 1988 when the team slowly dissolved. 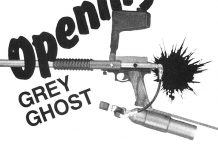 Opening of Paintball Connection in 1989 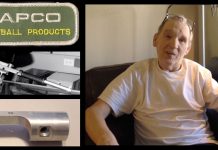 Colin Thompson on the Invention of the Bottomline ASA

dan@paintballhistory - April 15, 2014 1
Colin Thompson, of Los Angles Paintball Company was an early innovator and one creation I had no idea he was responsible for was the Bottomline ASA Duckbill. 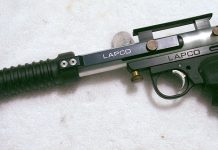 dan@paintballhistory - March 21, 2014 0
Paul and I visited Colin Thompson and showed his this Force recon. Colin told us about the beginnings of lapco. 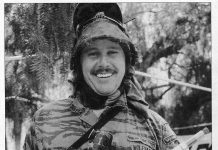 John Barber, of Who are Those Guys, pictured in APG May ’96

dan@paintballhistory - October 18, 2013 0
Holding his Frank Postle Frank Gun, and wearing his Who are Those Guys and That Gal Mercenary Servive Tiger Stripe Camouflage.