The Interceptor was Jack Rice's second production marker after the A1 Revelation which was never fully released.
In a facebook post identifying an Interceptor as a 2006 model, Tim Firpo, aka Paintball Tek, writes:

"2006 Alien Interceptor, this is the 2nd version of the marker (arguably his 2nd release since the original 'Alien' gun with the trap door feed never really launched) with supposedly 'looser' tolerances than the first.

I have one of each and honestly prefer the '05 better (in pic).
They originally approached XSV to shoot them when they were coming out as a team and I believe some of their members did shoot them very briefly, but eventually they went with Planet Eclipse and the rest there is history.

The company is run by one guy in here in NorCal named Jack Rice and he has had several other markers released after (Remains, Invasion, Deception, etc...) and also did a 'balanced valve' for cockers which had mixed success.

The wiring harness in these is problematic to say the least, lots could be improved on there. they use the NME style circuit board and standard 9v battery (stock was WAS coding).

The bolt and valve design is supposed to put 'backspin' on the ball but honestly it doesn't really operate any differently than a standard stacked tube poppit though Jack will swear up and down that he has scientific proof it does.

The LPR is intimidator spec, their stock HPR regs on the 06 were not great, I'd suggest replacing with a CP if you plan on keeping it.

They take cocker barrels and I believe Ion feednecks? Maintenance is kind of a pain aside from the regs since the rammer housing is all internal, the whole marker has to be disassembled to get to it and re-grease it which brings up issues of damaging the already frail wiring harness each time.

Jack has also said that they only need maintenance once a year, but realistically if you're using it a lot it should be re-greased like any other poppit valve setup.

For what it's worth, the '05 was my go-to marker for a decent amount of time in the mid-2000 up until the wiring started giving me problems and randomly shutting off when I was playing.

I still plan on building a new better harness from scratch and resurrecting it at some point. I had a good buddy who loved the '06 I had and borrowed it any chance he got as well, heh. The frame and trigger design is still one of my favorites! I believe retail on these was around $700-$800 back in the day...now I'd say probably somewhere between $100-$250 on the used market just because of the little known history/lack of knowledge. Not a bad marker by far, just very little info and very little support for them at this point."


Thanks to Tim Firpo for the great information and please message him for help with your favorite Alien marker! 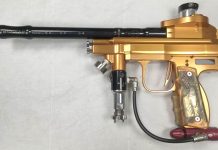